A major new cultural landmark for China takes its place on the global stage.

China’s first National Maritime Museum has now commenced formal operation, the culmination of a 6-year process that began with an international design competition, followed by an intensive design and construction process. The Museum has a distinctive form that reaches out into the bay from a large waterfront parkland, behind which a new city district of Tianjin, called the Binhai New Area is currently being developed. It is a landmark project comprising four wings, focusing on the themes of “the ancient ocean,” “ocean today,” “journey of discovery” and “the age of the dragon”. The three-storey museum, covering 80,000 square meters and containing six display areas and 15 exhibition halls. These halls are interconnected so that visitors are provided an opportunity to understand and interpret China’s maritime evolution in relation to events in Europe, America, and wider Asia.

COX Architecture was awarded the project in 2013 after winning an 8-month iterative design competition process involving multiple stages of client and stakeholder feedback. The building comprises a series of interconnected pavilions that cantilever out over the water in a ‘fan-like’ formation from a central reception hall. This central space is both for transition and exhibition and provides access to the upper of the two exhibition levels. On the lower level, stores for non-exhibited collections are co-located on-site to enable artifacts to be easily distributed to each of the adjacent exhibition spaces. From Philip Cox’s initial watercolor sketches, the design evolved and certain compelling metaphors either resolved or emerged – jumping carp, corals, starfish, moored ships in port, and an open palm reaching out from China to the maritime world. Without resorting to literal mimicry, some are more obviously expressed, such as in the geometric pattern and textures of the cladding, also functionally designed to shed heavy snow loads during harsh winters typical in this part of China.

The articulated pavilions provide a constant connection between inside and out. The user experience exists within the landscape and is a key organizing device of the plan, helping to orientate visitors on their journey experience. During the development of the design, both physical and digital modeling was carried out to test the building structure, and many of the key details of the design. This approach greatly improved the quality of outcomes and assisted communication beyond any language barriers. The process was innovative – especially for a project of this size, scale, complexity, and location – in its deployment of parametric computer modeling that allowed both scale and detail to be resolved concurrently. Physical models focused on human scale and interaction while complex geometric algorithms resolved the doubly curved building ‘shell’ and its related cladding system. 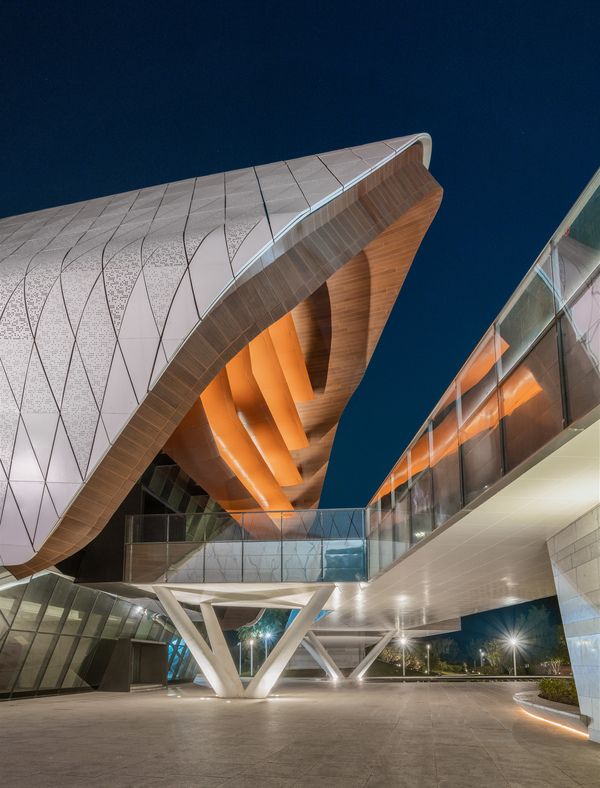 Energy for the building is predominantly sourced via geothermal, being drawn from 100 meters below the building. The museum held its soft opening in May 2019. Admitting up to 1,000 visitors a day while operations are refined and while exhibitions are fully installed. Full public operation is anticipated in October. Brendan Gaffney, National Director for COX, based in Brisbane said: “The National Maritime Museum of China is justified in its ‘landmark’ status…it is a remarkable building borne of a remarkable process. It is a project that’s totally at home on the global stage. It is a testament to the commitment of our open-minded and collaborative client and to our team, whose talent and tenacity in equal measure ensured this building stayed true to its vision in every possible detail.”

Photography by Terrence Zhang with courtesy of Cox Architecture